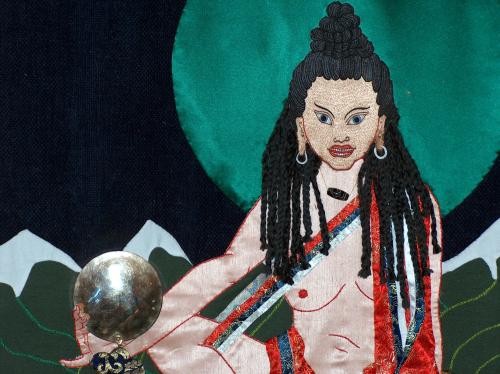 Several parts of the appliqué had been prepared in advance to ensure that it could be completed in the limited time we had available. Ngala Nor’dzin, with Sangyé’s assistance during the craft sessions of Ngak’chang Rinpoche and Khandro Déchen’s retreat in May, had finished the lotus flower petals – a long and complicated part of the work. One of the first tasks of the retreat was for Ngala Nor’dzin to teach most of the apprentices how to sew chain stitch, because she wished there to be more embroidery on this appliqué. We set about our work quietly and systematically with relaxed, light-hearted conversation. The parallel task of repainting the shrine room was commenced with the room being cleared. The appliqué thangka will be displayed on the wall of the shrine room, as well as being carried to retreats and places where teachings are given, as an inspirational image.

The evening meal was always preceded by the oration of ‘The Drinking song of Kyabjé Dud’jom Rinpoche’, with a glass of wine, followed by cheerful salutations of “Kalpazang” and the clinking of glasses. Ngakpa Samten was head chef, as he had been for the 2003 craft retreat, and delivered food of such variety and quality that we were repeatedly surprised and delighted. The whole retreat was one of team work with volunteers appearing to give all necessary assistance before and after meals. Ngakpa Samten said:
“This process always seemed spontaneous and effortless, with the minimum of apparent organisation.”

On the first Sunday morning of the retreat we deferred our usual early practice until after breakfast as we were to be joined by other practitioners for the regular monthly meeting of the Cardiff Vajrayana Meditation Group. Ngala Nor’dzin led the practice of yogic song and meditation, and gave a teaching on the Four Naljors of Dzogchen Sem-dé. For the rest of the week, mornings began with practice from 7.00 till 8.30 a.m.