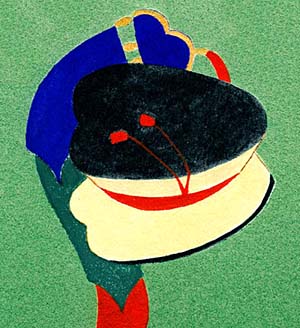 The skull damaru of Aro Yeshé was given to him by Khandro Yeshé Dzü’drül, the sister of A-Kyong Düd’dül Dorje. Ngakpa ’ö-Dzin Tridral comments:
Khandro Yeshé Dzü’drül was physiologically unusual with regard to her hair and skin colour – being pale and having curling hair which was considerably lighter in colour than is normal for a Tibetan. As Khandro Yeshé Dzü’drül grew up she studied with the yogis and yoginis of the gar and received special attention from Khyungchen Aro Lingma, who gave her the special protector practice of Mamo-Za – a female manifestation of Za Rahula. Yeshé Dzü’drül had eye problems as a child and was never able to see clearly due to her severe astigmatism and strabismus. Due to her inability to see much beyond coloured light, she was always accompanied by someone when walking in the mountains. Being excused from all work she was able to devote her time to practice and gained a good level of experience – especially with gTumo. Its was later said of her that she had the ability to warm the water of mountain pools, and spent most of her time naked. She was close to A-yé Khandro and A-shé Khandro and received many formal transmissions from Aro Yeshé. Yeshé Dzü’drül was thus one of the few disciples for whom Aro Yeshé made an exception with regard to giving formal transmission – and it was on one such occasion that she presented him with her skull drum. The skull drum was one which had passed down through the family of A-Kyong Düd’dül Dorje. It had belonged to A-Kyong Düd’dül Dorje’s father, grandfather, and great grandfather. A-Kyong Düd’dül Dorje gave the drum to his sister after a dream of clarity in which he perceived that its sound would be auspicious in relation to her development of vision.

Ngak’chang Rinpoche comments:
Skull drums are usually not to be found in monastic settings – at least not as regards public use. They are more predominantly an implement of the gö-kar chang-lo’i dé. The use of human bone is the direct inheritance of the charnel grounds of ancient India and the mahasiddha tradition which was born there. Human bone is symbolic of Dharmakaya with regard to the essence of being. On khatvanghas, the three kayas are represented by three heads: the skull is the Dharmakaya, the rotting head is the Sambhogakaya, and the freshly severed head is the Nirmanakaya. Skull drums are made from paired male and female skulls as a symbol of the indivisibility of method and wisdom – form and emptiness. The skull drum is also a wrathful symbol, because the skull is the seat of the 58 wrathful yidams of the Bardo Thödröl. The skull drum of Aro Yeshé was originally made from the skulls of the mother and father of the great grandfather of A-Kyong Düd’dül Dorje.