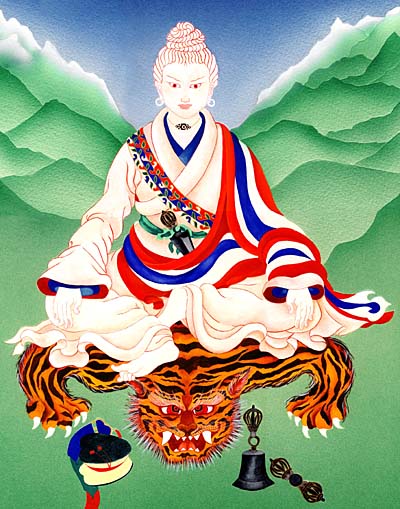 the posture of ‘mind resting in comfort and ease’

Aro Yeshé is shown here in the Dzogchen posture sometimes known as ‘mind in relaxation’ and sometimes as ‘mind resting in comfort and ease’. Aro Yeshé, like Khyungchen Aro Lingma and Jomo Chhi’mèd Pema, was primarily a Dzogchen master – and like them, engaged in minimal ritual activity. Although not particularly known as a phurba master, Aro Yeshé wears a phurba in his belt as a symbol of the weapon of the major yidam of the Aro gTér.

Khandro Déchen comments:
Showing a Lama with a phurba is one way of depicting him or her as a tantrika. There are many such images of Nyingma Lamas. Monastic Lamas were also shown with phurbas in their belts to indicate that they were inwardly powerful tantrikas.