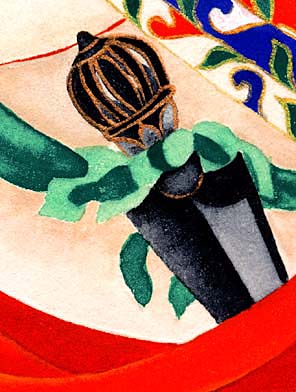 The iron phurba of Aro Yeshé was, like his bell and vajra, originally made for ’a-Shul Pema Legden by his friend A-Kyong Düd’dül Dorje. The phurba was made of meteorite iron. Ngakpa ’ö-Dzin Tridral comments:
The phurba is shown in Aro Yeshé’s belt in order to depict him as being the heir of ’a-Shul Pema Legden. Had Aro Yeshé been portrayed according to the nature of his practice, he would probably have no implements or ornaments at all. The gomtag and conch earrings are shown because he inherited them from Khyungchen Aro Lingma. The most familiar implement for Aro Yeshé would have been one of his various firearms – but there is no precedent for showing such an implement iconographically. There is also no detail as to exactly what firearms Aro Yeshé possessed apart from the fact that they came from India and were likely to have been misappropriated British Raj weaponry.