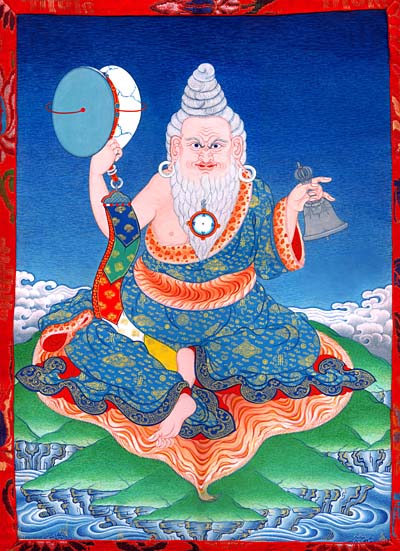 Rang-rig Togden’s full name was Rang-rig Trögyal Pawo (rang rig khro rGyal dPa bo). Khandro Déchen comments:
This beautiful Tibetan thangka painted by Kumar Lama shows Rang-rig Togden wearing a blue chuba trimmed with the skins of tigers and leopards. Although Rang-rig Togden’s chuba was trimmed with such furs – the actual chuba would not have been embroidered with gold thread as shown here. The inclusion of gold thread is an honorific convention of Tibetan thangka painting, and emphasises the quality of veneration rather than depicting how Rang-rig Togden actually dressed. He is shown sitting on an island which indicates that he spent his life as a reclusive hermit, as it was often the case that a Lama such as Shabkar and many others would live on islands within large lakes in order to remain private from those who would come bearing continual gifts and requests for blessings. He is shown with a mélong braided into his beard in depiction of his practice of Dzogchen long-dé.

Until meeting with Jomo Pema ’ö-Zér, Rang-rig Togden had been a wandering gÇodpa, but she instructed him in the practices of Dzogchen long-dé which she had received from her aunt Jomo Chhi’mèd Pema, and after that he had several visions of Yeshé Tsogyel, Tashi Chhi’drèn and Mandarava. They practised all their lives in caves and spent almost all their elder years in retreat.