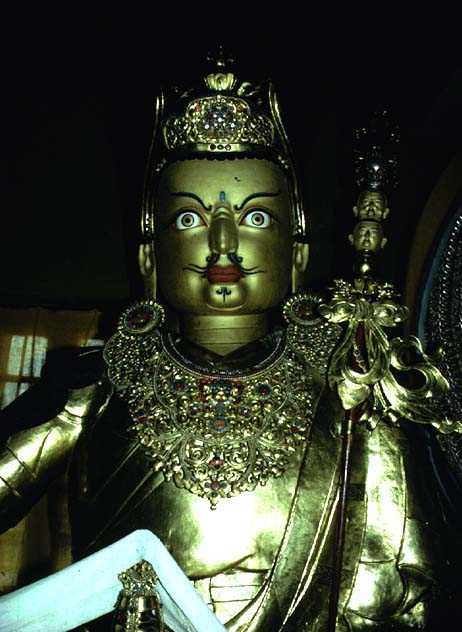 Padmasambhava was predicted by Shakyamuni Buddha:
Fifteen years after my death, one will come with greater capacity than myself – one with the power to establish the teachings of Vajrayana in the world.

This statue of Padmasambhava can be found within the ‘Tsuglhakhang’ – the main temple of His Holiness the Dala’i Lama in McLeod Ganj. Padmasambhava is the Tantric Buddha – the second Buddha, who brought the teachings of the Nine Yanas of Buddhism to Tibet and the entire trans-Himalayan area. He subdued all the negative forces which had caused obstacles to the establishment of the teachings and founded the two sanghas: the red sangha of monks and nuns, and the gö-kar chang-lo’i dé (gos dKar lCang lo’i sDe), the white sangha or ngak’phang sangha of ngakpas and ngakmas, naljorpas and naljormas.

Shakyamuni Buddha had given the teachings of Vajrayana in secret to the 84 Mahasiddhas. Padmasambhava then collected the entire body of Vajrayana from the Mahasiddhas and completed it within himself. He is shown here with the wide-open eyes which betoken the spatial dimension of Dzogchen. He wears the robes of the nine vehicles of practice, the royal robe and the robe of the tantrika. He wears the lotus hat of the King of Zahor. The King of Zahor gave Padmasambhava his crown after he transformed his execution-pyre into the lake of Tso Pema. He cradles the khatvangha trident in the crook of his left arm. The three points of the khatvangha pierce the fabric of attraction, aversion and indifference. The secret nature of the khatvangha is Yeshé Tsogyel – Padmasambhava’s secret spacious wisdom nature. He sits in the posture of royal ease; in display of the natural state, in which everything relaxes into the condition of primal purity.