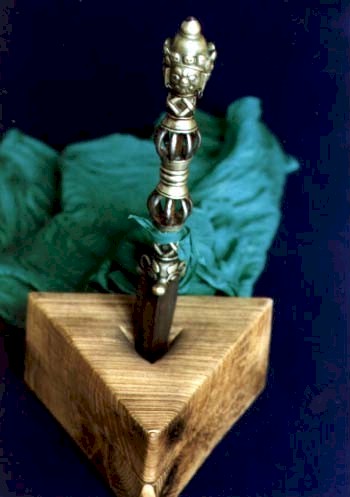 This phurba is one of the nine treasures of ‘The Confederate Sanghas of Aro’. It is one of the many phurbas made by A-kyong Düd’dül Dorje who made a set of special Tröllö phurbas for Aro Yeshé. This phurba is connected with the Buddha Karma of pacification. There were four others – three connected with the Buddha karmas of enrichment, magnetisation, and destruction – and the fourth being ‘the phurba of the fundamental ground of reality’ which was carved from a solid piece of crystal which was seventeen inches in length. The phurba shown here has a blade and ‘spine’ made of meteorite iron.  The ‘spine’ or srog-chak (life iron) runs from the blade to the crown ornament of Dorje Tröllö’s head. This phurba was traditionally used in a phur-khang or phurba house in which the phurba was employed as part of a lightning conductor. The details of this practice are exclusive to those who receive the deeply serious samayas of the Dorje Tröllö Phurba drüpthab.