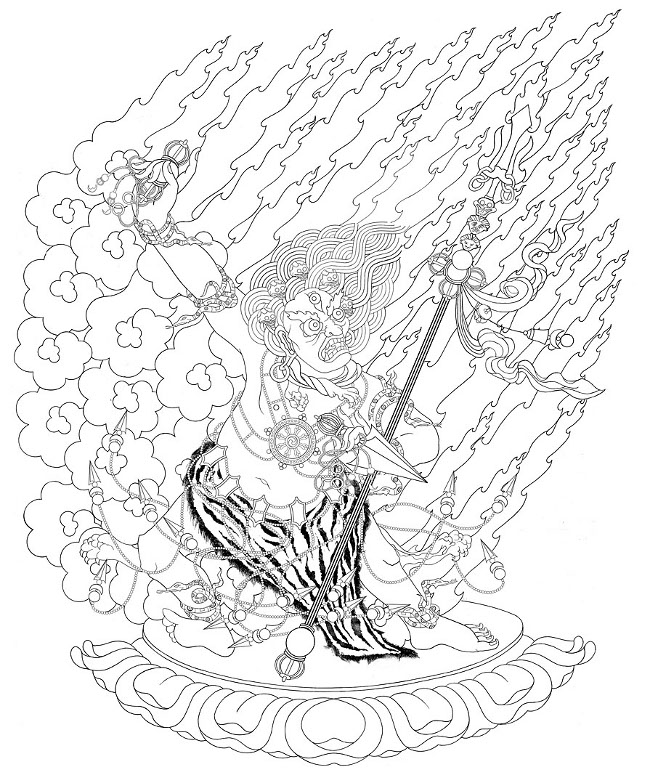 Raging destroyer of the five mikas

Khandro Déchen says of this line drawing:
The Aro gTér Seng-gé Dradog is quite different in many ways to the more commonly known forms of this manifestation of Padmasambhava – but the meaning he represents is identical. One of the main differences with all the Aro gTér yidams is that they do not trample anthropomorphic forms of delusion – nor do they wear garlands of severed heads. The reason for this is that their imagery is linked more with the Dzogchen teachings in which everything is naturally self liberated. According to the Aro gTér – Seng-gé Dradog, as a manifestation of Padmasambhava, carries a khatvangha. In this case the khatvangha represents Tsogyel Dradog – one of the eight manifestations of Yeshé Tsogyel. He carries a phurba in his right hand to demonstrate his ability to destroy attraction, aversion, and indifference. In his left hand he carries a vajra – symbol of method and of the indestructible nature of being. In addition to the phurba and nine-prong vajra, he also holds a thunderbolt snare in each hand. With the thunderbolt snares Seng-gé Dradog traps the deluded concepts of those who distort the teachings through gross mundane corruption and through the puritanical corruption of spiritual materialism. In the style of the Aro gTér, all his implements are nine pronged.