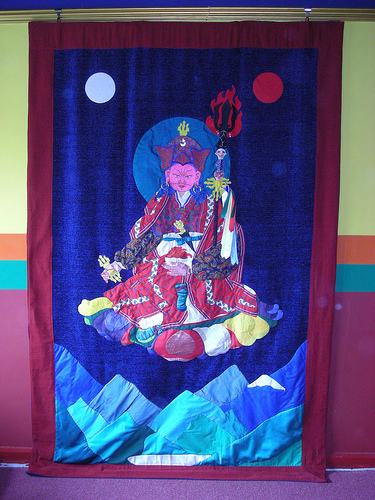 the first appliqué made by Aro

This appliqué of Padmasambhava manifesting as Guru Nang-srid Zilngön (sNang srid zil ngon), was the first of the Aro Lineage appliqués to be created. The Aro Lineage has not got a home as yet – in the sense of a building to use as a retreat centre – so over the last 20 years it has been important to be able to create the atmosphere of a shrine room in whatever venue we used to hold a retreat. Traditional thangkas, painted on cloth, can be quite fragile and would not survive being continually rolled up and transported from place to place. So Ngak’chang Rinpoche and Khandro Déchen suggested the creation of fabric appliqué thangkas, that could be transported to retreat venues to be displayed without risk of being damaged. Hence in 1994 the first appliqué thangka of Padmasambhava was created. These, along with a set of nine printed thangkas from Nepal of Padmakara and the eight manifestations, adorn the walls of the room being used as a shrine room in any venue. Once the thangkas are in place and apprentices are established wearing their red, white and blue shawls, and with instruments set before them on practice mats, even the most mundane setting takes on the atmosphere of a Tibetan gompa.