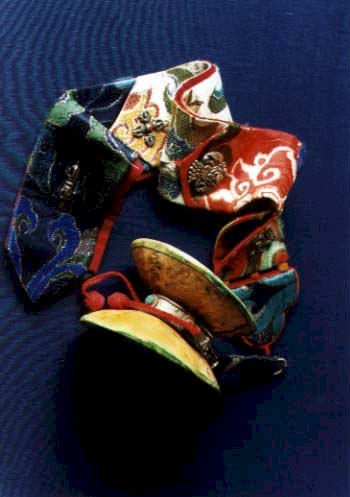 The skull damaru is more pervasive within the Nyingma tradition – with its emphasis on Vajrayana practice. The more commonly used damaru in the other schools of Tibetan Buddhism is the wooden or ivory damaru; both of which are shaped like stylised skulls. This damaru used to belong to Ngak’chang Rinpoche, who owned it since 1972. He subsequently gave it to a disciple, when presented with a new skull damaru by his friend Gyaltsen Rinpoche. It is seen as extremely auspicious to be given any kind of implement of material for practice by one’s Lama.

The appended chöphen or ‘reality flag’ of the damaru is red, white, and blue in colour – representing the solar, lunar, and central channels, respectively. The chöphen (still used by Ngak’chang Rinpoche) is ornamented by tok chak (lightning iron) vajras and other decoration. Tok chak is formed when lightning strikes the earth. Often shapes are fused which resemble symbolic forms such as vajras. Two such tok chak vajras are sewn to this reality flag (one can be seen on the blue portion of the chöphen).

The reality flag is lined with material blessed by Kyabjé Düd’jom Rinpoche. The ‘cloud’ of the reality flag is joined to the three-coloured ‘rainbow’ section by three Tibetan amber beads which come from a mandala set from Mindroling Gompa. These beads were given to Ngak’chang Rinpoche by his friend Lama Lödrö Rinpoche.