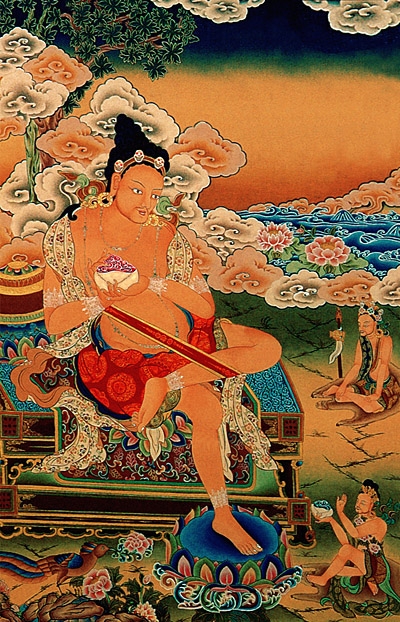 The Ka’bab Zhi (bKa’ babs bZhi) lineage of teachings were brought to Tibet by Marpa. They were initially received from Dharmakaya Buddha Dorje Chang (rDo rJe lCang) by the Mahasiddha Tilopa, who transmitted them to Naropa, Maitripa and Marpa. The lineage was then passed down through Milarépa to the Kagyüd (bKa’ brGyud) lineage of the Karmapas and other Lamas of both Kagyüd and Nyingma lineages.

Ngak’chang Rinpoche comments:
Tilopa is a profound example of the vajra master. He spared no effort in confronting his disciple Naropa with what was necessary. Naropa’s ability to receive transmission was obstructed by a welter of concepts as to what constituted spirituality and Tilopa manifested in the guise of whatever conflicted with Naropa’s conditioning. Because Naropa believed that Tilopa was the only one who could set him free from the constraints of his incomprehension, he was prepared to undergo repeated shocks to his ideological infrastructure. Tilopa was entirely politically incorrect from the point of view of Brahmanic society, and Naropa was locked into the Brahmanic paradigm. This was an explosive situation and one that led to Naropa’s realisation.