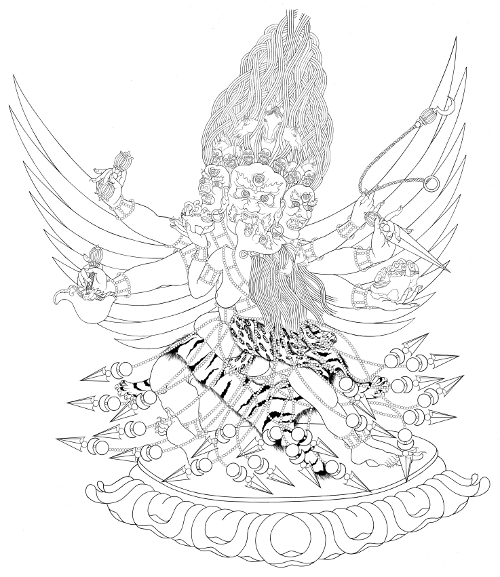 This is the majestic flaming form of the searing red yidam, Lord of horses, supreme commander of the cavalry which dispels the minions of puritanical institutionalised aggression. White, blue, and red horse’s heads rear skyward from the crown of his head in proclamation of his mastery of the spatial winds. Tamdrin’s hair is burning copper and gold.

Tamdrin is in ecstatic embrace with the terrifyingly iridescent green Yeshé Tsogyel – the Lady of horses, supreme standard-bearer of puissant wisdom appearances. The red, blue, and white horses whose heads rear skyward from the crown of her head, proclaim her mastery of the essential thig-lés: the red and white bodhicittas unified in the blue immensity of the spatial continuum. Yeshé Tsogyel’s hair is clear blue flame flickering into orange sparks. She holds a fanged leopard skull in her left hand, and the vajra snare in her right hand.

Tamdrin and Yeshé Tsogyel wear the ru-gyan, the six human bone cemetery ornaments, in display of their mastery of the six Tantric vehicles. Their naked feet are adorned with razor claws.

They fly in the vastness of being with the nine-fold razor wings of the heruka—the Traktung—the primæval blood-drinker. Their nine-fold wings manifest their power to display non-dual freedom within the nine bardos. They lacerate all vestiges of clinging to past or future. They lacerate any tendency to protract the infinite quality of the moment into the narrow channel of limited time.

They roar with incendiary lust. Their voices are the howling solar and lunar winds that inflame boundless kindness in everyone and everything everywhere.