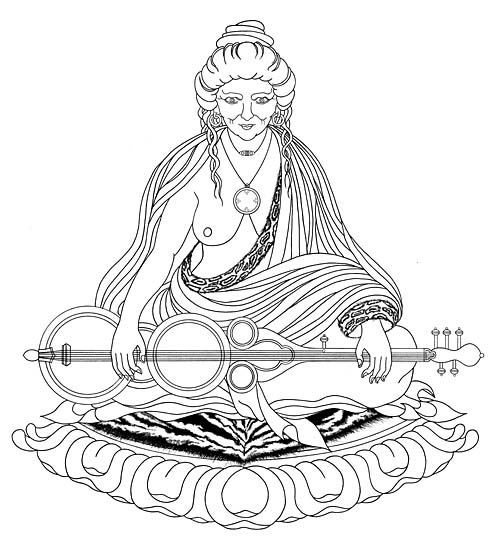 One of the Five Dakini Mothers of Aro Yeshé

Khandro Shardröl Rinchen Wangmo held a family tradition concerning birds which she had received from her mother – A-shong Rig’dzin Gyalmo (A shong rig ’dzin rGyal mo) and received a considerable body of teaching from Aro Lingma on this subject. These teachings were gTérmas of Jomo Chhi’mèd Pema and Jomo Pema ’ö-Zér.

Khandro Shardröl Rinchen Wangmo did not see a great deal of her mother when she was a young child as she was brought up by her father’s other two wives. She would however go up into the mountains to spend some of each summer with her mother and at these times she learnt a great deal about practice. She was unafraid of wild animals and was never injured by them – no matter how ferocious they were toward human beings. She left home permanently to live in the mountains as her mother’s attendant and disciple when she was thirteen, and remained with her until her death.

After her mother’s death she left the area and travelled as a wandering practitioner until she met with Aro Lingma’s party as it travelled south from Golok. She taught Aro Yeshé how to play flute and dramyen and many practices of envisionment. She had experience of rTsa rLung exercises and was highly proficient in the sKu-mNyé and A-tri systems of the Aro gTér. She took particular interest in plaiting Aro Yeshé’s hair, and he gave her the prediction that this would give her causes for skill in language in her next life. She was a strong practitioner of Dorje Tröllö and Takdong Pawo.

She is depicted as a strong beautiful middle-aged woman holding a dramyen and wearing a mélong at her heart centre. She is also depicted in naked form with two snow lions resting their heads in her lap.