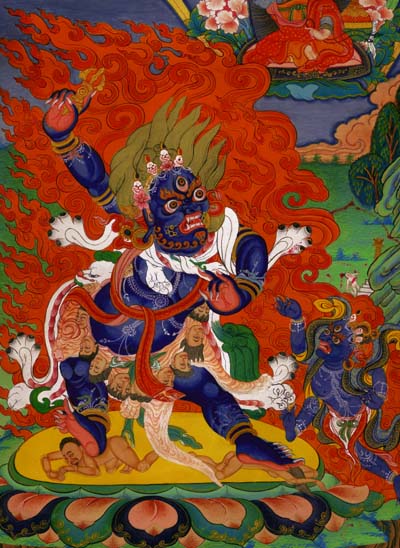 The flayed hide of a snow lion and of mikha (mi kha – distorted speech) become the raiment of Seng-gé Dradog. These are representations of the one taste of pure and impure. The snow lion roams the tracts of pure snow and mikha is the impure common gossip of samsara – but Seng-gé Dradog wears them both in recognition of the primal purity of everything.

Khandro Déchen says of this thangka:
Seng-gé Dradog is blue in colour – the colour of space, yet the palms of his hands and the soles of his feet are red – the colour of energy. He wears golden ornaments as well as human bone ornaments in order to portray his glorious regal command of all circumstances. He wears the tiger skin skirt of a yidam and wields the golden vajra which encompasses the fire wisdoms of the five dakas and dakinis. At the centre of the vajra is the gakhyil (dGa ’khyil) – the circle of joy which represents the indivisibility of essence, nature, and energy.