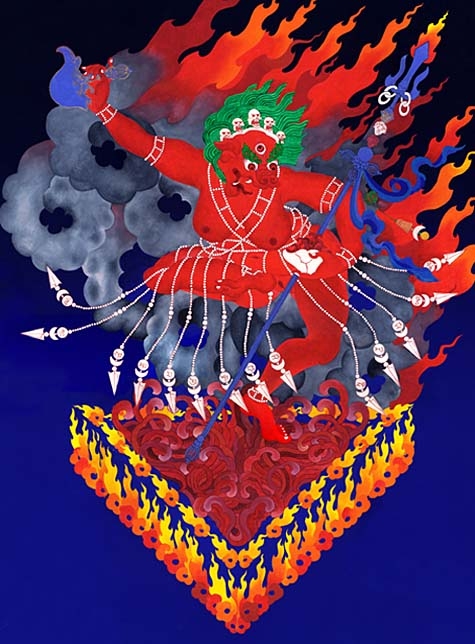 the volcanic glare of her flame-coloured body

Red Seng-gé Dongma wears the six human bone cemetery ornaments of the six classes of Vajrayana. The human bone skirt, draped over her thighs, bears the fourteen syllables of destruction – the root mantra of all the Seng-gé Dongmas of which Khandro Déchen says:
These syllables are the support of the Fourteen Root Vows of Vajrayana, and through the shik-sé-shik sound of the ru rGyan (human bone cemetery ornaments on which the fourteen syllables are carved) caused by her swishing hips, all tantrikas are reminded of their commitments. Her awareness-spell is the weapon of Padmakara – and with this weapon, heresy and heretics are ground in the mortar of the earth, under the pestle of Padmakara’s footfall. The ground of distortion is shaken, and the ashrams of Tirthikas disintegrate.

The volcanic glare of her flame-coloured body burns away the limitations of all codified contexts. Ngak’chang Rinpoche says of the Red Seng-gé Dongma:
She is the naked corpulent magical mother – the virulent voluptuous vajra-sadist who lacerates the deceptions and connivances of Tirthikas (heretics – so called by their adherence to the four philosophical extremes). She dances with immense vigour—crouching and springing—in the violent yogini postures. Through the exuberant ferocity of her callipygous swaying belly, she displays the magical energy of the natural state. Her pendulous breasts glimmer with the radiance of the limitless expanse of reality, in which everything arises and dissolves inseparable from primal purity. The savage kindness and ruthless compassion of her dance ignites the display of unconditioned wisdom for the benefit of everyone and everything everywhere.