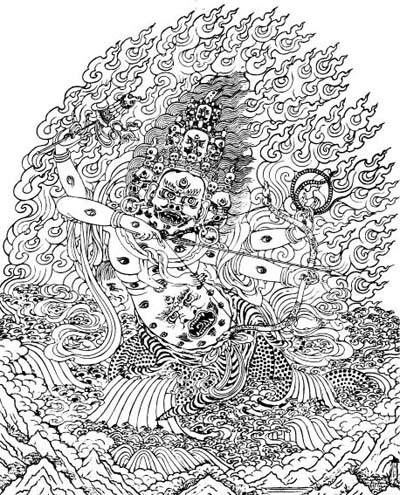 Khandro Déchen says of this traditional line drawing:
Za Rahula is depicted here emerging from a violent landscape amidst mountains which boil an ocean of blood. He carries a bow and arrow with which he shoots into the heart of every tendency toward vow breakage. The lower part of his body is a snake – whose tensile coils are poised to spring in any direction with the deadly accuracy of a cobra. His body is covered with eyes which see in every direction – so that nothing escapes his terrible gaze. In the Aro gTér, Rahula is said to have one hundred and eleven eyes – through which he observes the samayas which relate to the entire series of yidams. He has nine heads which represent the nine vehicles – and these heads are unified by the single raven’s head which surmounts the highest head. The raven emits the sound A which represents the entire Prajnaparamita teachings, and it is said in Tibet that ‘it is worse to kill one raven than five hundred monks’. Rahula has a mouth in his stomach with which he devours vow breakers – who burn in the boiling acid of his indestructible stomach. He holds a makara headed club in his raised left hand with which he pounds excuses for deviating from vows into sub-atomic dust. In his upper right hand he holds a snake noose with which he throttles all attempts to justify breaches of Tantric honour.

Ngak’chang Rinpoche commented that:
The energy of the landscape in this line drawing is indicative of the way in which Za Rahula rides roughshod over the pettiness which leads to vow breakage. It is often when the pride of a delicate self-image is hurt that we are led to break our vows – and it is at times like this that Za Rahula is a potent image in terms of how we bring ourselves back to our samayas.