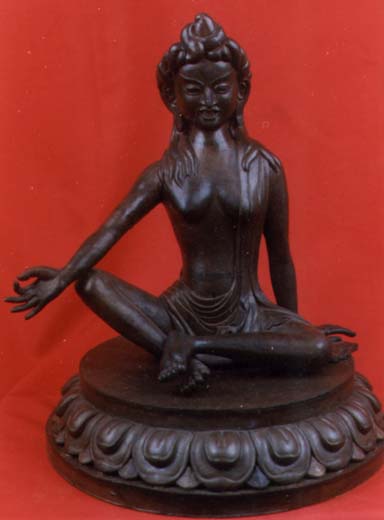 Khyungchen Aro Lingma was born with great ease and without making any sound. The first act she performed was to make a long drawn-out hiss with her lips drawn up into wrathful aspect, as if she were performing a rTsa-rLung breathing exercise.

A great number of eagles appeared in the sky at her birth. They swooped and glided very close to her parents’ retreat cave entrance. All manner of sky phenomena also appeared – including clouds shaped like yung-drungs and ga-kyils. Strong gusts of wind sprang up and subsided quickly, and the sun and moon were clearly visible in the sky at the same time. Her parents instructed her in Trül-khor (Yantra yoga) from a very early age and she had mastered gTu-mo by the age of nine. She could not endure to wear clothes for most of the year until she was an adult and left the retreat cave. This is why she had the name Réma or cotton-wearing lady, because she had the power to generate her own inner heat.

This statue lacks the mélong or wisdom mirror with appended chö-phen (reality flag) which Khyungchen Aro Lingma should be holding, and also the gZi stone at her neck.