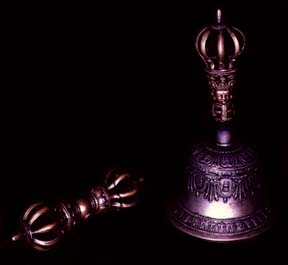 the primary symbolic tools of compassion and wisdom

The dorje and drilbu (rDo rJe and dril bu; vajra and ghanta) are ubiquitous within the symbolic activities of Vajrayana Buddhism (rDo rJe theg pa). The dorje and drilbu shown here are of the tse gu (rTse dGu) or ‘nine-prong’ variety which are more common to the Nyingma lineages. According to some lineages, the nine-prong dorje and drilbu are associated with the practice of Dorje Tröllö (rDo rJe gro lod), and with others they denote a certain stage of accomplishment. In the Aro gTér the nine-prong dorje and drilbu were used almost exclusively, as there are many teachings which are stratified in a ninefold formation. Usually the nine prongs represent the nine yanas, but in the Aro gTér lineage the nine prongs represent: the nine bardos; the nine skies; the nine mélong sem’dzin of Dzogchen long-dé the ‘Nine Songs of the Owl-headed Dakini’; the ‘Nine Grim Weapons’; and, the ‘Nine Grim Garments’. The dorje and drilbu shown here belong to Ngak’chang Rinpoche, and were given to him by Kyabjé Düd’jom Rinpoche. Rinpoche used them in most of his longer retreats in India.