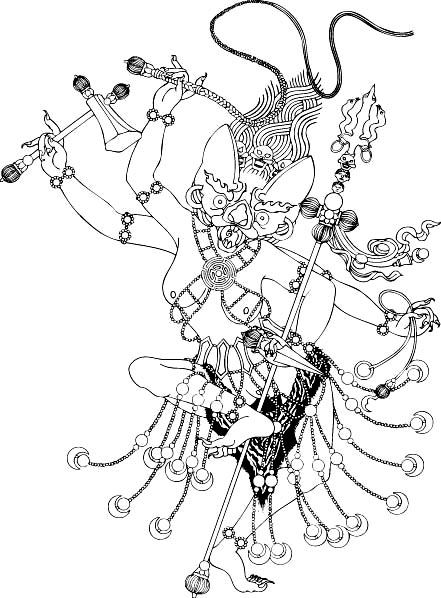 The Bat Headed Dakini of the Aro gTér

Ga-phong Dongma is a yidam of the Aro gTér who is invoked as a means of emotional and mental healing. Her iron hair pulses with dark smoky flame and displays her ability to choke every nuance of dualism. She wears the wrathful five-skull crown as the sign of her power to transform conflicting emotions into the spectral wisdoms of chö-ku; and to instantaneously transform degraded forms of the physical elements. Her horrific complexion is dark purple: the colour of eviscerated entrails, and of fire seen through poisonous smoke – reflecting her non-dual rage at all obstacles to realised vitality and non-dual well-being. She wears the ru-gyan, the six human bone cemetery-ornaments, in display of her mastery of the six Tantric vehicles. The chest ornament of the ru-gyan is composed of two circular yung-drungs. The outer yung-drung is the wrathful female manifestation of the four Buddha karmas and the inner yung-drung is the wrathful male manifestation of the four Buddha karmas. She wears amethyst yogini’s earrings as the sign that she ruthlessly rids all beings of the infection of dualistic contrivance. She cradles an iron khatvangha in the crook of her left arm. The tines of the trident are the heads of three ravens which emit the sound of A in the three times, in order to eclipse all possibility of dualised derangement. In her upper right hand she clutches the crocodile hide vajra whip which defeats dualism through maceration. In her upper left hand she carries the elephant hide vajra noose with which she throttles the dualistic fear which interprets vivacity as a threat to security. In her lower left hand she holds a nine-pronged coral phurba which destroys eternalism. In her lower right hand she wields a nine-pronged conch vajra hammer with which she smashes nihilism.