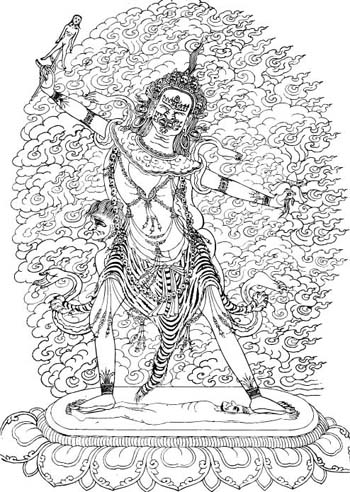 Khandro Déchen says of this traditional line drawing:
This line drawing of Ekajati is obviously the one on which the thangka painting of the three Nyingma Protectors is based. There are many representations of Ekajati according to the different Nyingma traditions – and Ekajati is also found outside the Nyingma tradition. According to Phüntsog Rinpoche, there is a form of Ekajati within the Drigung Kagyüd School in which she has one leg in addition to the other ‘singular aspects of her being’ – i.e. one tooth, one braid of hair, one eye, and one breast. In the Aro gTér form of Ekajati, she has two breasts – but a single skull on her crown. The Aro Ekajati also wears nothing but bone ornaments and her cloud tabard – she wears no tiger skin skirt. Ekajati is the Queen of Mamos – the ruler of all protectors.

Ngak’chang Rinpoche says of Ekajati:
Ekajati wields a human-corpse club with which she smashes dualistic clinging with its own form. The meaning of the human-corpse club as a symbol of ‘self-destruction’ is that the illusion of ‘self’ destroys itself through the agency of its own illusory form. The club is not a living entity – just as the illusion of duality belongs to the realm of experiential rigor mortis. She bites the ripped out heart of justification. Justification is that which allows us to cling to anger and so ‘justification’ needs to be ‘uncompassionately murdered’. To ‘uncompassionately’ murder our justification is to give rise to uncompromising compassion – the compassion which can let go of all reference points in order to release all violent impulses into the clear state of their own arising.