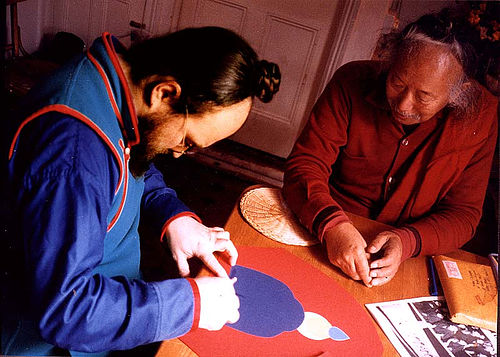 Ngak’chang Rinpoche says of Chhi’mèd Rig’dzin Rinpoche:
He was one of the most important Nyingma Masters of the 20th century who lived to see the first years of the current century. He was the holder of two gTérma lineages: the Khordong gTér—which is the legacy of Nuden Dorje Dro’phang Lingpa Tröllö Tsal—and the Chang gTér or Northern Treasure—which is the legacy of Rig’dzin Go’dem. He was a Speech incarnation of Padmasambhava and an incarnated descendant of Khyéchung Lotsa, one of the Twenty-five Siddhis of Chhimphu.

His style of teaching, presentation, and transmission were unique and dramatic, but not dramatic in the sense in which a teacher might deliberately set out to portray such a quality. The drama of Chhi’mèd Rig’dzin Rinpoche’s vajra-persona and the vajra-ambience of his presence were self-igniting and self-manifesting purely in accordance with the nature of those who presented themselves. In his perfect efficacy he was always unpredictably unpredictable. In many ways Chhi’mèd Rig’dzin Rinpoche was culturally extraordinarily atypical. He stood outside the Tibetan milieu in terms of cultural affect—being beyond such formulations—but neither was he ‘Westernised’. He was simply outside the realm of categorisation.

He was highly politically astute and aware, although he had no personal interest in political activity. He was apolitical as a Lama and had complete disregard for status or prestige. I possess precious few ‘formally robed’ photographs of Chhi’mèd Rig’dzin Rinpoche, because he usually wore his clothes until they fell apart and never travelled with anything elaborate. In the formal photographs I have, he mainly wore my robes (ed. such as the robe waistcoat shown here).

In 1988 we had to make an empowerment hat together – because his had been left behind. Chhi’mèd Rig’dzin Rinpoche was always more concerned with bringing texts with him than with bringing ritual regalia – and our main activity together consisted of translating texts – or for my part repairing texts which had been partially eaten by silverfish. This was a difficult yet thoroughly enjoyable activity because I often had to guess at what the words may have been behind the holes in the paper – and that could often only be established in the context. If I were ever utterly confounded by a hole in a particular text I would simply show it to Chhi’mèd Rig’dzin Rinpoche and he would give me the missing word without even looking up from the text he was examining.